The apostle Paul writes in Romans chapter 15 of his letter to Romans: "For whatsoever things were written aforetime were written for our learning, that we through patience and comfort of the scriptures might have hope." In other words, the Bible is the history of God as the Creator, which we must use today and understand his supreme will for each of us..
With the crucifixion of the Lord Jesus Christ and the resurrection from the dead on the earth, Started the Era can be called the Era of the Church.
The new doctrine, which was originally called the Nazarene sect, was later called Christians. Arised in Judaism a little religious community, which no one perceived seriously, soon became a strong and organized religious union.
The word "church", which the Lord Jesus Christ first mentioned in them Math. 16: 18: "And I say also unto thee, That thou art Peter, and upon this rock I will build my church; and the gates of hell shall not prevail against it."
The word of the Lord has been fulfilled and the Church is now on earth already count 20 century. During the 20 century, the church was often oppressed and attacked by evil forces, but, did not get over. Also this phenomenon "Church" was the oppressor and attacker. In the name of the Church there have been a lot of war and violence. There was a lot of different opinions or false teachings within it. The Church was influential and was also influenced by. The relationship of church to world has changed the world and has made it like it is today. And the relationship of world to the Church has made the Church as we have it today.
As we know, there are three basic Christian Confession in the world: Orthodoxy, Catholicism and the Church's reformist-Protestant wing. On the other hand, these three confessions unite a lot of confessions and denomination and many cults and heresies have evolved in the church, which also posited its traces on the world. But everything Not so started. Just as all the great rivers begin to come from small streams, AS the New Testament states, The Church started existence from a small group of fishermen gathered in a small village of Nazareth in Judaea, the head of which was Jesus from Nazareth, was known as the son of the carpenter, who Everyone was surprised, from his knowledge of the Scriptures.
The GEPC originated in the Georgian Region of Shida Kartli , in the town of "Gori". Gori is the birthplace of Joseph Stalin, one of the most famous leaders of the Soviet Union. With the grace of the Lord the GEPC was established in Gori. The GEPC originated in 1990, in the midst of the most difficult period in the recent history of our Country. There were hostilities in the regions "Samachablo" (South Ossetia, Tskhinvali) and "Abkhazia" (Sukhumi). Because of the civil war the centre of the capital Tbilisi, was completely destroyed and the society divided and standing in opposition to each other. There was shortage (starvation), cold (there were no electricity and gas), and unemployment all over the country. A lot of people became refugees in their own country, the criminal situation became complicated, lawlessness and injustice prevailed in Georgia, and in addition, religious extremism was displayed towards the religious minorities.
In 1995 the GEP Church started independent formation in Gori, by the vision of Pastor Giorgi (Khvicha) Chitadze, who came to Gori in 1996, obeying God's calling. On November 1, 1998, Pastor Giorgi (Khvicha) Chitadze gathered several pastors and ministers in the church and founded the independent church. The church repeatedly became a victim of oppressions. The local government did not permit us to take premises on lease. All our appeals and requests were ignored, all the halls were shut for us, and we were restricted at all levels. The church mainly grew by the development of the cell- groups. We rented a flat, which became the first office of our church, where the church began its activity.
The E.-P. church from the beginning was open to co-operation with other churches. We closely collaborated (and still do) with the Evangelical Church "Word of Life." In 1999 E.-P. Church started divine services in Kareli and Khashuri regions and also in Rustavi. Pastor Giorgi Chitadze became the senior pastor of the movement. Around him the Spiritual Councils was formed. It carries out the government as in mother–church as in filial churches and controls the theological doctrines and the unity of the vision.
In 2004 Pastor Giorgi Chitadze moved to Rustavi to lift up the local church and became there the local pastor. In Gori the pastor of the local church became Shmagi Chankvetadze. He was the pastor of the E.-P. Church in Khashuri and since 1999 had ministered in the Central Office in Gori, as an assistant of the pastor and an administrator.
In 2005, in the capital of the country, in Tbilisi, the Mission was founded. The Mission serves in spreading the missionary ministry in Georgia and abroad. It will become the communication centre for the church mission. The spiritual centre will continue to be in Gori.

"And ye shall serve the Lord your God, and he shall bless thy bread, and thy water; and I will take sickness away from the midst of thee." Ex. 23:25-26;
"For as we have many members in one body, and all members have not the same office: So we, being many, are one body in Christ, and every one members one of another. Having then gifts differing according to the grace that is given to us," Rom. 12:4-6;

Papers of the Holy Fathers 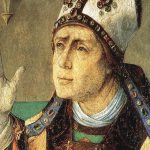 A letter from Albert Einstein to his daughter: about The Universal Force which is Love.